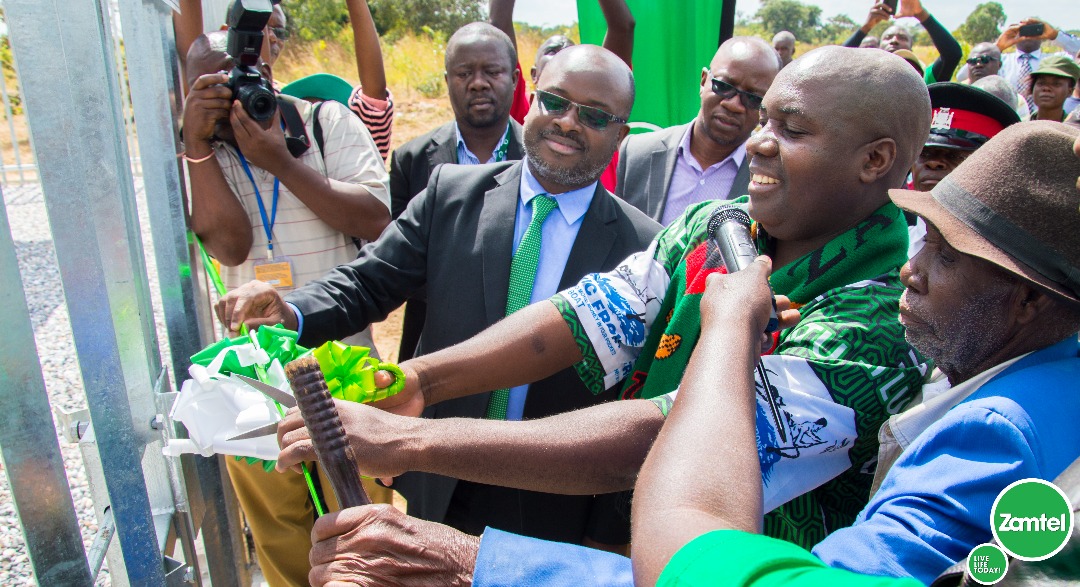 Zamtel connects Dundumwezi, reaffirms position as a network with the widest coverage

The move means over 20,000 people in Dundumwezi will finally be connected to the world though communication.

So far, more than 87 towers across the country have been switched on, reaffirming Zamtel’s position as the fastest growing network in Zambia with geographical presence in more places than any other.

In Dundumwezi, Southern Province Minister Edify Hamukale was joined in by area Member of Parliament Edgar Sing'ombe and Chief Chikanta and Senior Chief Siachitema at the ceremonial commissioning of the tower held at Mubanga Secondary School which attracted hundreds of local villagers.

Dr Hamukale commended Zamtel for taking communication services to the remotest parts of the country, a move he says will go a long way in bridging the digital divide.

“This is a milestone project in the sense that all the communication services enjoyed by our people along the line of rail, will now be available to the populations off the line of rail. As Government, we are confident that bringing such cutting edge communication services to places like Kalomo, will further boost the investment profile of rural areas,” said Dr Hamukale.

At the same event, Zamtel Chief Executive Officer Sydney Mupeta said the roll out of communication towers is testament of his company’s commitment to delivering communication services to all Zambians.

“Things can only get better as the joy of this development continue to spread to different parts of the country. The project keeps delivering smiles on the faces of many Zambians as we rollout the network to cover some of the remotest places in the country,” Mr Mupeta said.

He added, “This is an inclusive project that is connecting more and more places that never dreamt of having any network coverage at all. As a matter of fact, looking at where we are coming from and where we are going, I can confidently say that celebrations have just started. Today, only a total of 87 sites are live on air, including the one we are launching here at Mubanga Secondary School.”

On Friday, May 4 th 2018, Zamtel again commissioned another communication tower at Kafumbwe Boarding School in Katete in the Eastern Province.

Mr Mupeta said the launch of the new communication tower in Katete which is an important agricultural and transit town for traffic heading to Malawi in the east and to Mozambique in the south will foster national development.

He said it was imperative that the high volume of commerce that takes place in Katete and also transits through this town, should be given the right amount of ICT support.

At the same event attended by Chieftainess Kawaza of Katete, Eastern Province Minister Makebi Zulu commended Zamtel for launching the site which is one of the 113 communication towers the company is putting up across the Eastern Province.

“As you may be aware, Katete is a big agriculture centre and the need for a reliable phone network cannot be over emphasized,” Hon. Zulu said.