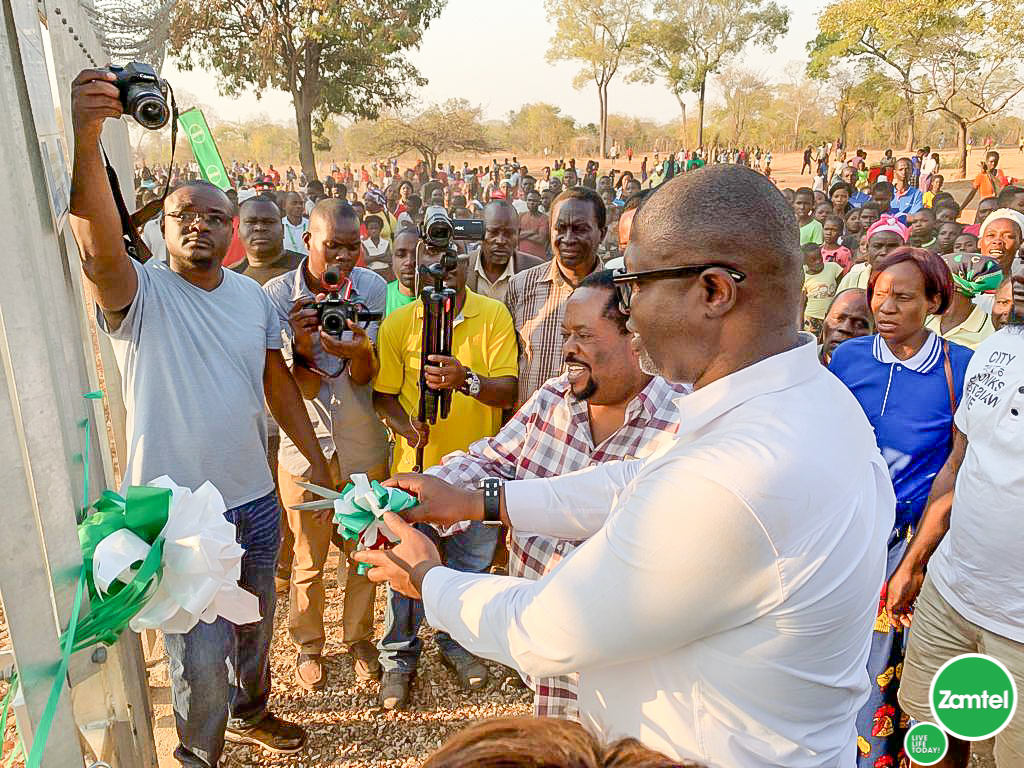 
Hundreds of people in Tumbwi and Penje-Penje villages of Petauke and Lusangazi Districts on August 28th 2019 witnessed the commissioning of two communication towers in the two Districts.

The two towers commissioned are part of the eight that have been constructed in Petauke and Lusangazi with an additional nine earmarked to be erected bringing the total number of towers in the area to 17.

This is part of the 1009 new towers that Zamtel is constructing across the country in order to attain universal coverage of communication services.

Speaking at the launch event, ZAMTEL Chief Commercial Officer Kenneth Sinkamba said the towers are part of the 1009 new towers that government is putting up across the country as part of the US$ 280 million Communication Tower Project Phase II.

Mr Sinkamba revealed that so far the project has delivered over 500 new towers in various parts of the country with a further 300 planned for completion before the end of the year.

He added that in Eastern Province alone, Zamtel has so far added 46 new sites on the network with plans to add another 60 which will significant improve the quality of network coverage in the Province.

“Zamtel is taking a deliberate approach to our business in the Eastern Province because we view this very rich Province as one of the priority areas due to the immense economic potential of this area. You will be interested to note that once we complete this network rollout, the entire Eastern Province shall be adequately covered,” Mr Sinkamba said during the launch ceremony.

And officiating at the two ceremonies, Msanzala Member of Parliament Peter Daka commended Zamtel for taking communication services to some of the remotest parts of the country where other service providers do not even want to go.

Mr Daka said communication is a very crucial ingredient in development adding that the people of Petauke and Msanzala will now be able to communicate with their family and friends effortlessly.

He has also encouraged Zamtel to deploy affordable handsets for the rural areas in order to encourage them to start using Zamtel services such as internet and voice calls.

At the same event, Chief Nyampande of the Nsenga speaking people of Petauke said the commissioning of the two towers will enhance development in his Chiefdom.

He said he will now freely communicate with his Headmen and Women on urgent developmental issues happening in the Chiefdom.

Chief Nyampande has since urged his subjects to safeguard the towers jealously and avoid vandalizing the infrastructure.

Zamtel is Zambia’s only total communication solutions provider. Zamtel is 100 percent owned by the Zambian Government, providing voice, data, fixed, internet, MPLS and business continuity services to businesses and individual customers in Zambia. Zamtel is committed to make a difference and empower communities as part of its Corporate Social Responsibility.